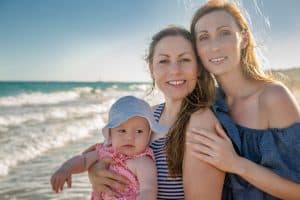 For years we have been meeting with same-sex parents and recommending a second-parent adoption where one of the two parents is the biological parent and one is not.  Today’s unanimous opinion from the United States Supreme Court demonstrates exactly why.

In V.L. v. E.L., two women had been in a same-sex relationship from 1995 until 2011.  During the relationship, they had three children together (a set of twins and a singleton).  In 2002, the first child was born and, in 2004, the twins were born – all conceived using assisted reproductive technology.   E.L. and V.L. raised the children together.  To protect V.L.’s legal relationship to the children, the couple participated in a second-parent adoption in Georgia.  Sometime later, while living in Alabama, the couple split up.  The non-biological parent pursued custody and visitation.  On appeal, the Supreme Court of Alabama, however, refused to recognize the adoption decrees (a form of order) from the Georgia Court, finding that the Georgia Court did not have subject matter jurisdiction because E.L. had retained her parental rights during the course of the adoption (something that is frequently done in second-parent adoptions).

Today the Supreme Court of the United States, in a per curiam opinion (that is, an opinion of the Court, not by any particular justice), relying on long-established principles of Full Faith and Credit, overturned the Alabama Court.  The Court concluded, “[t]he Georgia judgment appears on its face to have been issued by a court with jurisdiction, and there is no established Georgia law to the contrary.  It follows that the Alabama Supreme Court erred in refusing to grant that judgment full faith and credit.”

While it should never have come to this, it is heartening to know that adoption orders entered across the nation for this purpose are beyond this sort of attack – whether from an individual or from a court.  Haven’t done your second-parent adoption yet? It’s not too late.

McCabe Russell, PA, has helped hundreds of same-sex couples with their second-parent adoptions.  And we’d love to help you with yours! Contact us for your consultation today.