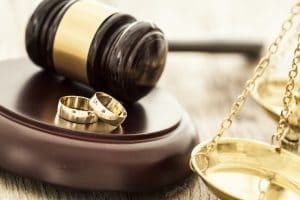 It’s safe to say that things are definitely out of the ordinary these days, and nobody knows quite when things will get back to our individual versions of normal. Everywhere you look there are stressors that can create problems in your personal relationships that. People who are “stuck home” together will eventually get on each other’s nerves. It’s human nature.

Sometimes, the little things that annoy you are merely symptoms of a larger, underlying problem. The more time you’re forced to spend together cooped up at home, the more you begin to notice things that individually, didn’t bother you so much before. Now that they’re in your face day in and day out, you’ve started paying much more attention to them – all of them. This period is going to test even the best of marriages, but many will unfortunately end in filing for divorce.

When the Coronavirus began to spread in China, the government locked everything and everyone down to help control the disease. This meant couples who typically worked separately all day, just as we do in the United States, were quarantined together 24 hours a day. This has caused increases in petty squabbles that turned into flaring tempers and instances of domestic violence.

There has been such an influx of divorce filings that the government is now backlogged. One city has reported that they are completing 18 divorces per day. This number is two-thirds the number of new marriage filings. When asked why the divorce rate has increased so much an official stated that “Trivial matters in life led to the escalation of conflicts, and poor communication has caused everyone to be disappointed in marriage and make the decision to divorce.” It sounds a lot like what we refer to as irreconcilable differences in the United States.

People being quarantined also causes an increased rate of depression due to stress and psychological distress. When people are in a mental health crisis and can’t get needed time alone to clear their head, it just compounds those feelings and can break a relationship.

Divorce rates in the United States are expected to follow suit and increase just as they did in China. Couples whose marriages were already rocky may be using this time to plan for divorce and their exit strategy. We may also see a similar problem as China with our courts becoming backlogged due to increased divorce filings. Talking with a divorce attorney sooner rather than later can help you determine how to be proactive now, which may help you shorten the wait in the long run.

Spending every minute of the day under the same roof with one another takes a lot of effort, understanding and compromise to keep a relationship healthy. Even then, there are characteristics that are tough to ignore.

Some things that can create a divide and end a marriage while dealing with Covid-19 include:

Another potential issue to come out of quarantining together is having more children, whether planned or not. If those marriages crumble, child custody and child support will also need to be taken into consideration. Thinking about what you want a parenting plan to look like can give you a head start to make the process less difficult.

The uncharted waters of being under home quarantine with your spouse for a long period of time will understandably strain your relationship. If you are considering divorce, the highly experienced family law attorneys at McCabe Russell, P.A. will guide you in making the best decision for you on how to end your marriage. To schedule a consultation with one of our Bethesda family law attorneys call 443-812-1435, or fill out our contact form.