Protecting Your Child from an Abusive Parent

Home/Protecting Your Child from an Abusive Parent

Protecting Your Child from an Abusive Parent 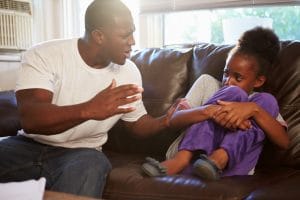 Some subjects in life are more difficult to wrap your mind around than others, especially when you are a parent considering how to protect your child. After all, that’s your primary job aside from loving, feeding and clothing him or her.

Protecting your child from strangers gets more difficult every day with the progression of technology, essentially placing those strangers right into your child’s bedroom. You can move computers out of his or her room, and add software to cell phones that hopefully cut off access to strangers, yet they still find other ways to get in. But what do you do when the abuser is already physically in your own home, and you know him or her? Even worse, what if that person is your child’s other parent?

When the unthinkable happens

Recently, in Maryland, a mother and wife had the difficult realization that her husband – the father of her children – was sexually abusing their four-year-old son. The mother did what most would: she fled the state with their children in an effort to protect them. It didn’t work.

Despite the court receiving a statement from a social worker confirming the abuse, the court tossed out the evidence, and claims were made that the mother was coaching her son to say his father was abusing him. The father still has contact with his children, including the abused child, who receives counseling.

This is not an uncommon occurrence, by the way: “Every year in the U.S., an estimated 58,000 children are placed in the custody of or with unsupervised contact with an abusive parent, according to the Leadership Council on Child Abuse and Interpersonal Violence, a nonprofit professional group that promotes the ethical application of psychological science.”

Maryland is trying to combat this issue legislatively, but there are things you need to do – fast – if your child is being abused.

Take action to protect your child

Whether you are in a relationship with your child’s other parent or not, or if you are legally married to him or her, once you learn that abuse is occurring, you need to take steps to prevent your child from coming to any further harm. If you have proof outside of what your child has told you, the first thing you can do is file for an emergency custody hearing. It may sound callous, but you will need evidence of the abuse in order to obtain this hearing, and to be granted emergency custody.

If the abuse is such that the court feels that you should be entitled to an award of sole custody of your child, you may receive both sole legal and physical custody. This status will permit you to maintain complete control over whether your child has any contact with the parent who has been perpetrating the abuse on him or her. In the alternative, the court could still award you custody with visitation to the other parent, and set the rules under which he or she may have that contact.

Some of the conditions the court could set in the event that the abusive parent receives visitation can range from supervised visitation by a neutral third party, to being required to go to parenting classes, and/or counseling.

Seek the advice of a Fulton family law attorney who understands the urgency of escaping domestic violence that has been committed against you or your child, and will fight for your safety. To schedule a consultation one of our skilled child custody attorneys at McCabe Russell, P.A., please call 443-812-1435 or by providing your information via our contact form. We maintain offices in Fulton, Columbia, Bethesda and Rockville.