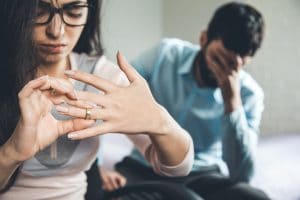 With technology and the amount of international traveling that so many people are now able to do, the world is much smaller than it used to be. People travel to other countries for work, school, or extended vacations. Citizens from other countries also come to the United States for the same reasons. Starting a relationship with someone who isn’t an American citizen isn’t so unlikely anymore.

There are approximately 11 million permanent and temporary visas issued each year in the United States. Foreign spouses may enter the U.S. under temporary visas, and they account for nearly 95% of the visas issued. People have different reasons for marrying, some of which may lead to divorce faster than others. Separation and divorce can create some real challenges if you or your spouse is in the country on a visa.

Why a limited divorce may be your best option if you are not a U.S. citizen

In Maryland there is a difference between limited divorce, sometimes referred to as separation, and absolute divorce. An absolute divorce terminates your marriage and disposes of all financial and child-related issues. Under a limited divorce, the parties live separately but are still legally married. This route is typically used when no grounds for divorce currently exist, financial support is necessary, and the parties have been unable to settle their differences among themselves.

Just as with absolute divorce, limited divorce can settle certain aspects of the marriage such as financial and child-related issues, but this is only on a temporary basis. While you and your spouse may have reasons for choosing one of these legal statuses over the other, the U.S. Citizenship and Immigration Service (USCIS) or Board of Immigration Appeals (BIA), has the authority to interpret state law and may choose to decide whether your marriage has ended even under a limited divorce.

Timing is everything when you plan a divorce

If you are the sponsored spouse, and your intent is to remain in the country after your divorce, you may need to strategize when you separate or file for divorce based on the type of visa you obtained. Conditional visas expire after two years so you would need to timely file a petition to remove conditions of residence. That time frame occurs during the final 90 days before expiration of your green card.

While you can file this form after your marriage has ended along with a waiver, that could make it more difficult to become a permanent resident. You’re still required to show that you married in good faith and intended to stay married. Basically, you need to show that you didn’t marry under false pretenses just to gain citizenship.

Documentation that you could submit to prove your marriage was entered into with legitimate intentions include:

For foreign spouses who have already obtained their green cards, their status shouldn’t change but the waiting period to become naturalized may. Naturalization while married requires a 3-year wait while divorce requires a 5-year wait.

For the sponsoring spouse: Form I-864 Affidavit of Support

If you are the sponsoring spouse, you have a separate requirement under the law when it comes to divorce. As one of the visa requirements for bringing your spouse to the United States in the first place, you were required to complete form I-864. You signed on for very specific financial obligations by doing so.

By sponsoring your foreign spouse, you are agreeing to financially support him or her, regardless of your future marital status. Sponsorship means providing a level of support that is equal to or exceeds 125% of the U.S. poverty guidelines until your spouse:

Nowhere in the obligation does it say that divorce is a reason to cease financial support. Even if your spouse moves in with a roommate or another romantic partner, or has financial means, you are required to maintain support.

While it’s essentially built-in alimony, the difference is the amount isn’t based on your income or lifestyle. It’s based on poverty guidelines. This doesn’t mean that your spouse couldn’t attempt to seek additional support during your divorce proceedings, so seeking legal advice from a highly qualified divorce attorney is certainly in your best interest.

Under the worst case scenario, you could face having to permanently support your soon to be former spouse. Just for reference, 125% of the 2019 poverty guidelines for an individual would mean paying $15,612 in support per year. Of course, this is separate from any potential child support that could be awarded if children are involved.

If you are facing divorce, don’t do it alone. The many intricacies and complications that arise require knowledgeable legal advice and guidance. The dedicated Bethesda family law attorneys at McCabe Russell, P.A. will help ensure that the process of ending your marriage goes as smoothly as possible no matter your circumstances. To speak with a member of our experienced legal team call 443-812-1435, or we invite you to reach out to us through our contact form.