Can a Child Have More Than Two Parents?

Home/Can a Child Have More Than Two Parents?

Can a Child Have More Than Two Parents? 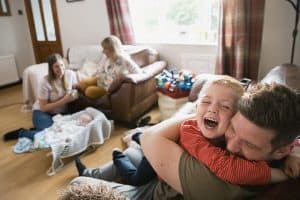 Madison is a girl who lives in California, a state which recognizes multi-parenting, or “tri-parenting.” Her legal parents include her two moms and a dad: her father is the sperm donor, one of her mothers carried her, and her other mother is married to her birth mother. It is her non-birth mother who became her official third parent through adoption.

Maryland does not offer this type of arrangement, but multiple other states do, including Pennsylvania, New York, and New Jersey. (Washington, D.C. may be on its way as well, having creating a potential pathway through legislation for surrogacies.) Trial court rulings in California, Oregon, Washington, Massachusetts and Alaska have allowed third-parent adoption when a partner of one of the biological parents becomes a legal parent through adoption.

How parenting is changing

One of the first cases of “tri-parenting” took place in Louisiana in the 1980s. In this case, a married woman gave birth to a child who was not her husband’s, biologically. Because the child had a relationship with both men, the court allowed that both men were the child’s fathers.

At the time, the Louisiana case was the exception. For years, family courts throughout the United States and around the world have recognized the “Rule of Two,” which allows children to have just two biological parents: the woman who gave birth to them and her husband at the time of the child’s birth. The two-parent model has been the “norm,” but increasingly the norm is changing. Given the increasing prevalence of Assisted Reproductive Technology (ART), which is changing the way families are formed, the traditional model which spawned the Rule of Two is now giving way to an expanded view of parenthood, and some courts have responded by increasing the number of legal parents a child can have.

These distinctions matter. As the authors of “Parentage Without Gender” explain, “The question of what constitutes a legal parent-child relationship under American law has become increasingly important because of its primacy in the determination of rights and obligations, but also increasingly complex because of reproductive technology and changing patterns of childbearing.” Whether a child legally has two parents or three, it is important that all of his or her parents are committed to caring for that child. If two parents choose to get divorced, determining which party is responsible for what percent of the child support – or how each parent will spend time with the child – may not be covered by a traditional rule of law. Allowances will need to be made, and it is important that even states which continue to follow the Rule of Two have some kind of plan in place to accommodate these issues, should the need arise.

Whether it is a lesbian couple with two moms and a dad, a husband and wife and a second dad, or any other iteration of an intentional family, the most important thing you can do is love your child. The second most important thing is to work with an attorney who can help you navigate the waters of Maryland’s laws with respect to your family’s needs. Legally, you may not be allowed to adopt a child who has two legal parents, but we can help you and your family create a plan that protects your child’s future.

If you have any questions about child custody or second parent adoption, the Fulton family law attorneys at McCabe Russell, PA are here to answer your questions. Please call 443-812-1435 or fill out our contact form to reserve a consultation time. We represent clients throughout Howard and Montgomery Counties, with additional offices in Columbia, Rockville and Bethesda.