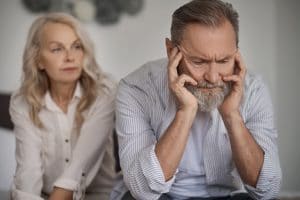 The image of long-time spouses growing old together is projected so often in film, television, internet lists of “best growing old together” quotes, and even on social media sites that some married people might find it difficult to contemplate a necessary divorce. But like other categories of married people, many mature adults will change their marital status and get divorced.

In fact, as divorce rates for younger married couples began to decline in the 1990s, divorces for married people above 50 grew at such a high rate that social researchers coined the term “gray divorces” to describe them. While gray divorces share similarities with divorces between younger couples, they also present some unique considerations.

How common and is gray divorce?

If you or your spouse are considering a gray divorce, you are not alone. Susan L. Brown, Co-Director of the National Center for Family and Marriage Research (NCFMR) at Bowling Green University, explains that the divorce rate for those 50 and older “doubled between 1990 and 2010” and has since “plateaued” at that level. According to Brown, a “generation ago, less than 10 percent of divorces involved a spouse over age 50. Nowadays, though, more than 1 in 4 getting divorced in the U.S are over age 50.”

What are the reasons for gray divorce?

Brown suggests that a number of factors play a role in prompting divorce for older couples. As routine duties around work and caring for children change in mid-life, spouses may lose common purpose and feel they have “drifted apart.” Married couples over 50 now define successful marriage by feeling fulfilled, and given the expectation of longer life spans, are more reluctant to stay in unsatisfying marriages. In contrast, in the past successful marriage meant performing certain, individual marital roles and staying within an assigned role to avoid the “stigma” of divorce. Today, those over 50 find divorce more acceptable, reject definition by old roles, and some likely have divorced once before, making them more open to divorce as an option. Many people seeking gray divorce are hoping to create happier, more fulfilling lives.

In “5 Reasons Long-Term Marriages Crumble” Robin L. Flanigan, writing for the AARP, takes a slightly different approach to categorizing the main reasons more mature couples people seek divorce. Like Brown, Flanagan recognizes the “empty nest” as a prominent cause. But Flanagan also explores particular reasons that make continuing in a long-term marriage undesirable for those over 50, listing infidelity, conflicts over money, lack of communication, and unresolved past issues as main reasons. Of course, the grounds for a gray divorce in Maryland have to comply with Maryland law.

Considerations for a later-in-life divorce

If you or your spouse are entertaining the idea of seeking a gray divorce, in addition to the questions asked when planning a divorce in Maryland, you also should consider how a divorce at your stage in life might impact your financial position and other personal relationships. For example, people considering gray divorce have to think about how much time they might have to recoup any financial losses related to the divorce and will want to consider:

Therapist Meredith Shirey also recommends that people considering divorce from a long-term marriage pause to “take stock of their personal feelings, goals and expectations for both married and single life” before acting. Since older couples likely have had longer marriages, their relationships with spouses and family members may be more complicated and “entangled.” Shirey advises people to prepare for gray divorce by consciously thinking through how divorce will affect them and others, and consider the “best and worst scenarios,” asking what they will gain and lose through the divorce. Mature couples considering divorce may want to seek emotional support through therapy or other self help means such as meditation to sort through their feelings.

The advantages of gray divorce

Mature adults may find it easier to divorce. Older adults may find that they know themselves and their needs better than they did when they were younger. This self-knowledge can create confidence about the divorce, allowing them to make divorce-related decisions more easily. While having an “empty nest” means children are gone from the family home, it also means the children are grown and living independently, and therefore less likely to experience the kinds of changes in lifestyle they might have experienced if they were younger and living in the home. Adult and older children may have an emotional response to gray divorce, but they also may have more emotional maturity to cope with their feelings. Many, but not all, older adults have accumulated more assets, ensuring that they and their spouses can survive economically after a divorce. Some see gray divorce as means to create the life that best suits them now.

Whatever your personal circumstances, if you or your spouse are considering a gray divorce, you will need experienced, professional help to work through the many legal and financial issues presented by your situation. The Fulton family law attorneys at McCabe Russell, P.A. provide experienced, capable representation for clients considering divorce, and will guide you through the divorce process and provide answers to your questions. Set up a consultation with a member of our team today by calling 443.917.3347 or reaching out to us through our contact form. We will meet with you to talk about your particular situation and divorce process. We also maintain offices in Bethesda, Rockville, and Columbia.